It is very wise to prepare for disasters or other events. Just think about all the people who suffered horribly during a disaster — when they didn’t have to — had they been prepared.

According to FEMA, a high percentage of individuals take one action of preparedness where 46 percent takes 3.

Some people go off the grid to save money, however, the majority of people transition to off-grid living for safety purposes. Those who decide to live off the grid are the ones taking full action and won’t have to worry about things like the power going out since they supply their own power, or the city water getting contaminated as they also maintain their own water supply. However, to achieve this security, you will need to find the right location and more.

Here are 5 things to consider before buying land to live off the grid:

For most people, the main reason for living off the grid is safety. Therefore, finding a safe location would be the first step to take, but it isn’t always easy as everything has upsides and downsides including locations. There really isn’t a perfect place to live in the whole world.

Some areas may not have hurricanes, but may be prone to large earthquakes, where others may not get either, but may have other safety concerns such as

The best way to decide on a safe spot is by writing a list of all the locations you might be considered along with their pros and cons then figuring out which would be easier for you to deal with.

2. How much it will Cost

It’s true that those living off the grid save a lot of money on many things such as power, water, food, and more. However, it may take a chunk of cash to get things set up for off-grid living.

First, you would need a place to live that’s far away from rural areas. Once you settle on a location you will have to either buy a house or a land to build a house on and building a home is not cheap, when you consider buying the land, paying for building permits, hiring contractors, purchasing supplies and equipment, paying for somewhere to stay while your house is being built, and more. It may be cheaper to buy a home that’s already built.

Next, you would have to have a source of power, a water supply, and a septic tank for waste removal. Most homesteaders choose solar panels as their power source, build a well for water, and create their own waste removal system, however, none of these things are cheap, and they all can cost you a pretty penny to set up.

There is a lot of people who would live off the grid if they had the means.

3. Earning an Income after the Transition

Even though you will be saving a lot by living off the grid there will still be bills to pay and things to buy. You will need to pay property taxes, a cell phone bill since you don’t want to cut off all ties with the real world, and if you want to go online, you will have to pay for internet services as well, and then you will also need to buy supplies and hygiene products.

There are many ways to make money while living off the grid. One of the things that other people do is freelance work. You can find numerous freelance jobs online, where you can write articles for many businesses, do transcription work, data entry, take surveys, and more.

Another thing to consider is getting a work at home(WAH)full or part-time job, which is becoming more and more popular these days. If you ever called a phone company, or other business about a bill or other, chances are you talked to someone who was working from home. There are many places hiring WAH workers all you have to do is search for them online.

You have to eat no matter where you live and living in a remote area doesn’t leave you too many options, you can’t just go shopping at a local grocery store every few days. Besides, that would defeat the purpose of living off the grid where you are supposed to be producing your own food.

Farming is one way to do this. You can plant your own fruits, vegetables, and herbs right on your own land. However, it takes some time to learn how to grow your own food so I suggest you start learning.

Pickling and Preserving is another way to make some tasty foods to enjoy, but just like farming, this will also take some skill to be able to do. You can learn everything you need to know, online for free.

Raising Cattle will allow you to put some meat on the table. Keep in mind that you will need multiple pairs of males and females of each group to be able to produce more and you will have to feed them all and give them water too.

Hunting for food has always been a good means of eating off the land. You can hunt game like moose, deer, rabbit, and more with a good rifle. Just be sure and check the local rules for hunting in your area.

Fishing is another great resource for food and fish are good for you too.

Everyone needs water to survive, not just for drinking, but for other things as well, such as bathing, cleaning, watering plants, cooking, feeding cattle, and more. You also need to have some kind of sewage system to properly dispose of waste, which requires water.

According to the “U.S. Environmental Protection Agency” (EPA), nearly 15 percent of Americans supply their own water. This water mostly comes from underground. The process of getting water is not very hard, you dig a hole until water sprouts out and then you add a pump to pump the water out making it available for use.

If you live in an area where it rains a lot you can also harvest the rainwater for household use with a “cistern”. A cistern is basically an underground or above ground water tank made from steel, concrete, or fiberglass. It works by channeling water from your rain gutters then pumping it into your house for use.

You can install a septic system, which is basically a large tank made of metal that collects your wastewater then releases it. When new wastewater enters the tank, liquid flows through pipes until finally being released into a drain field where the soil will filter it keeping dangerous bacteria buried underground until it’s absorbed as nutrients.

Once you get things set up it can be great living remotely, if you don’t mind being secluded from the rest of the world. Some people set up a homestead just to find they miss modern living and will go back to it.

However, there are nearly 180,000 families currently living off the grid according to the publisher of “Home Power Magazine”, Richard Perez. For the past decade, this figure has jumped by 33 percent each year.

Living off the grid can be a great move for some as long as you find the right location where you and your family will be content. Many families with kids, especially teenagers, find it hard to make such a move as the kids don’t want to leave their home and their friends to live in a secluded area where they feel they won’t have anything to do. However, as long as you have the internet, you will never be alone no matter where you are. 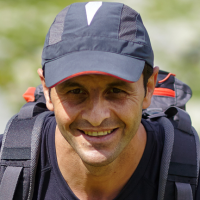 Conrad Novak
Conrad Novak is a proud father of two children. His journey as a prepper began when Hurricane Katrina hit and he lost his job due to the 2008 economic crisis. That made him realize that everything can change for the worst in a very short time. This experience was the detonator for him to pursue learning and becoming better prepared to face the kind of unexpected disasters that may occur at any point in our lives.