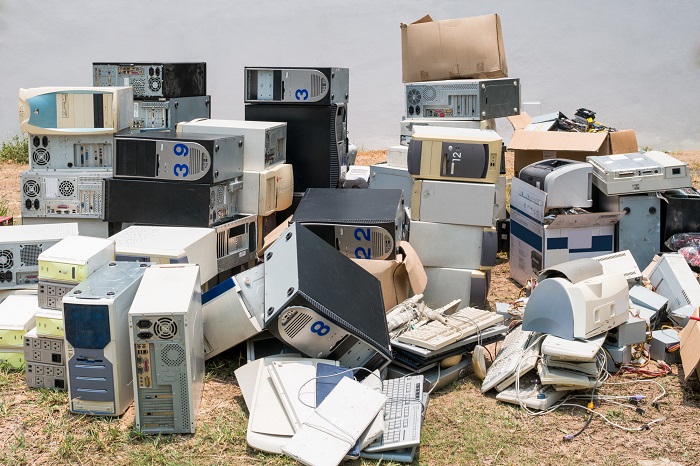 A pile of old computers waiting for sending to recycle plant.

Nearly 5 pounds of garbage is produced in America per person, daily. All of that amounts to billions of tons of trash annually.

While that massive amount of waste is a problem in itself, a new issue that’s adding to this concern’s scope is e-waste.

E-waste is electronic waste that encompasses cellphones, laptops, microwaves, and more. These items create unique challenges for traditional disposal workflows and consequently, put more pressure on the environment and consumers.

The solution to making e-waste less of a problem is properly recycling it.

Are you curious to know exactly why properly disposing of e-waste is so important? If you are, keep reading to become a more conscious consumer!

Most of us don’t think twice when we see a cellphone battery, a solar panel, or any other form of modern technology. That’s because consumers are insulated from the process that’s required to gather everything that goes into those items.

Not only are several materials electronics leverage hard to find but many are finite.  By recycling e-waste, you allow companies to retrieve these precious substances which can then be reused.

That dampens the impact that sourcing materials has on the earth and preserves the often poor communities where sourcing operations take place.

Do you know what makes a battery work? Substances like acid, lead, nickel, lithium, and mercury.

One thing that those elements have in common is that they can be poisonous and wreak havoc on the environment. When batteries are recycled properly, they’re disposed of in a way that keeps them from leaking harmful substances or creating noxious fumes as they deteriorate.

Most communities in first-world countries don’t want to be confronted with the impact of their waste. That has made it popular for junk to be shipped overseas.

You might ask yourself which countries would take our junk off our hands? Oftentimes, the answer to that question is the countries that are the poorest.

Resource-poor countries cut deals with rich countries to store their garbage on their shores. While that’s an issue that goes beyond the scope of this post, by ensuring that your electronics are not caught up in those shipments, you can reduce the impact you have on the developing world’s environment.

When your computer, tablet, or phone stops working, that doesn’t mean that your data on those devices disappears. In most cases, the hard drive in a dysfunctional electronic is fully operational.

So, imagine if you were to throw your phone in the garbage and someone later found your device and recovered the files on your drive.

Would you be comfortable with that person having access to all of your pictures, downloaded emails, and notes? If you answered no to that question, you’re better off properly recycling your e-waste.

Recycling centers will properly destroy devices and their drives as soon as recyclable materials are recovered.

Can you guess where recycled materials from e-waste go after they’re pulled from your trashed devices? Oftentimes, those resources are purchased by manufacturers who then put them into new merchandise.

It’s cheaper for manufacturers to source recycled resources than it is for them to source resources from the earth. Those lower costs mean lower prices for consumers which can save you money when you go to buy your next gadget.

While US landfills still have the capacity for garbage, given the alarming rate at which we produce trash, the concern of one day running out of space is real. Recycling e-waste helps avoid that issue for a little bit longer since e-waste that’s mined for materials will take up less room in landfills than they would if they had been thrown away whole.

While that might not mean much in the context of a single laptop, if you multiply space savings across millions of devices trashed every year, recycling saves an uncountable amount of landfill volume.

E-waste recycling companies make money off of the work they do mining materials from electronics. The more profitable these businesses are, the more they’ll invest in increasing the efficacy of recycling workflows.

A simple way to invest in recycling’s continued momentum is by recycling!

As more electronics flow through e-waste collection agencies, money and innovation will follow.

In case there weren’t enough social reasons to recycle e-waste, here’s a legal one that may be of inspiration to you. Some states target businesses that do not dispose of their electronics properly by hitting them with steep fines.

You can learn about the state of California’s existing regulations here as an example of what strict disposal laws look like. You can also explore more state’s rules online or by talking to a business attorney in the state you’re interested in.

We’ve heard time and again people doubt the impact that a single computer monitor or microwave is going to have on the environment. That attitude multiplied across millions of people is why we have the e-waste problems we’re managing today.

Always take personal accountability for your junk and remember that it’s everyone’s obligation to help keep our planet sustainable. Doing something as simple as putting your laptop in a proper electronic waste disposal bin is a big win for the world.

Curious to know more about the environment? If so, check out the newest content we have available on our blog.